A few months ago Max and I recorded a podcast where Max and I theorized on the what the home metal shop of the future would look like.  The podcast idea was inspired by the Making It podcast hosted by Jimmy Diresta, Bob Clagett and David Picciuto where they talked about what they think the future maker workshop will look like.  During the podcast Jimmy, Bob and David mentioned the idea of a laser bandsaw – something that Max and I also talked a bit about on our podcast. 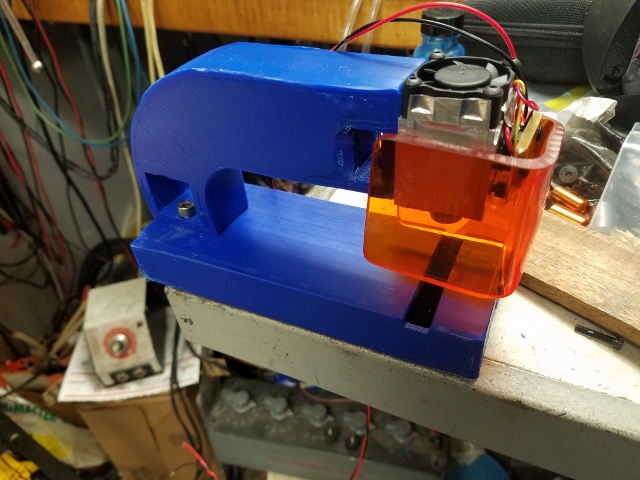 A month or so after the podcast Rod Shampine reached out to me to talk shop over the phone one night.  I had a very enlightening conversation with Rod, who is an exceptionally gifted mechanical engineer with over 50 patents.  Rod also has his PhD and has worked on some exceptionally interesting projects – both on the job and for hobby.  He is an active home shop machinist as well.  Over the last few years Rod has done a significant amount of work in the 3D printing world – he is very active on Thingverse and also has did a significant amount of work on 3D printers themselves.

In the conversation Rod told me he had acquired all the hardware to put together a laser bandsaw prototype.  At first I thought he was making a joke, but he went into specifics about safety, power supplies and the actual laser itself.  Rod certainly had a workable design flushed out – one that both had us very excited.

In December Rod sent me an email that he had finished his laser bandsaw.  It could only really cut paper and balsa wood but to my knowledge it is the first working prototype of such a device.  Obviously a laser bandsaw is exceptionally hazardous – particularly to your eyes.  Rod pointed this out numerous times.  But with proper eye protection and proper design a device could be made to work.

So thanks to Rod the future is now here.  I’m watching with interest to see where this all goes.

View all posts by Justin

One thought on “The Future is Here: Introducing a Laser Bandsaw”